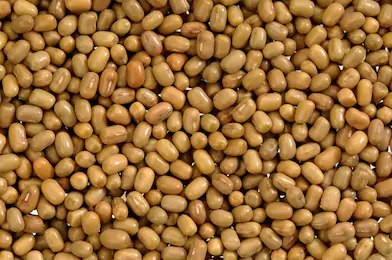 Moat" beans and not as Moth, though the spelling says otherwise. They are also known as Moath, dew beans, papillons, muths, mot beans, mat beans, Turkish grams, and mat grams. Commonly known as "Matki" in India. They grow in small pods on thick, matted bushes. In the winter, the pods are picked, dried and threshed, either by hand or mechanically. Moth beans can be found under cultivation throughout Southeast Asia and the Middle East. They are also sometimes cultivated in the Mediterranean, in places like Italy. The hardy creeping plant favours arid conditions, and neutral to acidic soils. The plant produces bright yellow flowers which turn into elongated seedpods, which will ultimately produce small seeds around the size of a grain of rice. These seeds can be dried and cooked or saved for planting next year. They have a nutty flavour.